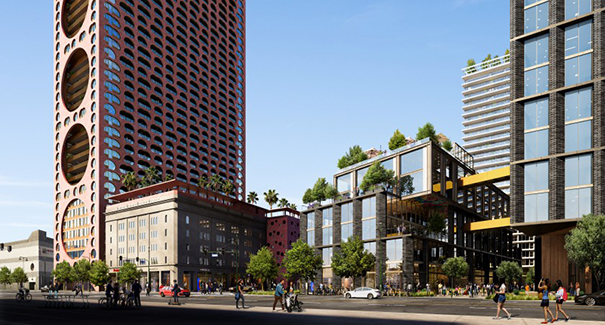 A $2-billion mega-project could reshape the Arts District

Blows to businesses during the pandemic have deadened the streets of downtown Los Angeles and threaten long-term changes to office life, but builders are pressing ahead with major projects in the belief that the city still has a lot of room to grow as times get better.

An Arts District cold-storage plant dating to the 1890s would be replaced with housing, offices, a hotel and shops in a proposal unveiled Thursday by Denver developers. With a price tag between $1.5 billion and $2 billion, the complex would rank among the largest L.A. commercial real estate developments in recent memory.

Continuum Partners launched the city approval process for a 10-building project that includes a residential skyscraper at Central Avenue and 4th Street, a historically industrial neighborhood dotted with art galleries, apartments and buzzy restaurants that has become increasingly attractive to tech and entertainment companies including Apple TV, Sony and Warner Music.