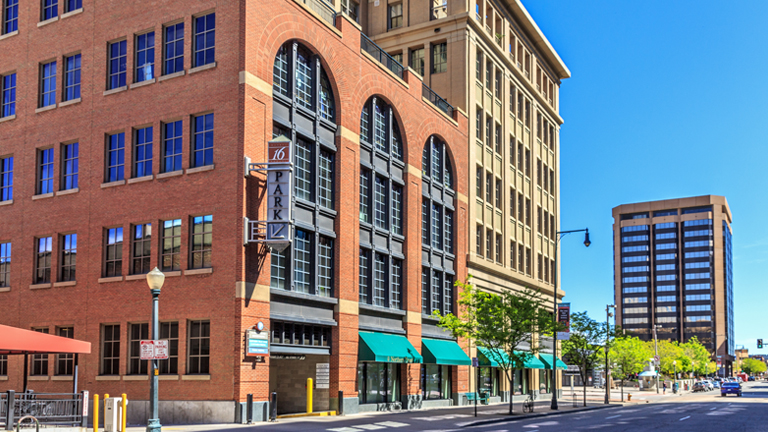 Three parking lots were sacrificed to make way for the 40,000-square-foot foundation of 16 Market Square, the new $55 million office building perched at the entrance to lower downtown that was completed in February 2001.

The eight-story mixed-use building — which embraces retail, commercial office and luxury residential space with a brick-laden charm reminiscent of the late 19th century — rests on the 16th Street Mall between Blake and Market streets.

It is the first tenant-occupied entity to inhabit that site in at least 20 years and Denver’s first new first class office building in 15 years, according to Mark Falcone, managing partner for the Denver-based developer of the project, Continuum Partners.

He said the area was ripe for redevelopment, given its proximity to the 16th Street Mall, Market Street Station and the city’s central business district.

“That site right on the Market Street Plaza is very important,” Falcone said. “It’s really kind of a gateway into LoDo.”

However, this excellent urban location presented some unique challenges in its construction phase, he said.

“The most difficult part of the project was the fact that it was on the 16th Street Mall,” Falcone said. “That created some challenging logistics because we had to be able to work in the street without interrupting bus service.”

At the recommendation of a LoDo design review board, Continuum also worked to maintain an alley that now bisects the building, because alleys are a standard feature in the neighborhood.

“Now it looks as though it’s two buildings with a bridge across it,” he said, adding that Hartman-Cox out of Washington D.C. was the architect on the project.

On top of that, horizontal space constraints required the project contractor, Turner Construction Co., to dig a 46-foot hole in the ground to accommodate three-and-a-half levels of parking, which total 100,000 square feet and house 290 spots.

“The lease-up and sales really exceeded our expectations,” Falcone said. “The residential units were sold out before we started construction, the office space leased extremely well and we were able to get some great ground floor tenants in the building,” including Northern Trust Bank, Noodles, Chipotle and Starbucks, he said.

The building’s office tenants include HQ Global Workplaces, Pennaco Energy Inc. and its first and largest tenant, Accenture — formerly Andersen Consulting — which moved in at the end of February.

“Our people wanted a change from the traditional high-rise,” said Accenture’s director of facilities and services, Linda Harmon.

“They wanted something more comfortable. And they wanted the LoDo area in particular because it’s been revitalized. The location of this building — with its proximity to public transportation and hot spots for our young people — is just wonderful.”

Harmon said the mixed-use character of the building, which places it in the new B-7 zoning code, has been a blessing for Accenture employees.

“Convenience is critical for our group because we work some long hard hours and just being able to pop out real quick [to the first floor restaurants] is great,” she said.

Rick Peterson, the principal at Oz Architecture who nominated Continuum Partners for this year’s Groundbreakers award, said the benefits of the building’s mixed-use status extend beyond its inhabitants.

“Including housing on the top two floors helps make for a vital neighborhood,” he said. “This building isn’t just nine to five; it’s 24 hours a day.”

While the new building is breathing new life into LoDo with all the conveniences of our modern times, it also blends in with its neighbors and doesn’t overpower the block, according to Peterson.

“Sixteen Market Square seems to strike a good balance between the historic sensitivity and modern times in a way that isn’t purely copying an old building,” he said. “It’s really raised the standard for the type of construction, type of materials and detailing that buildings deserve anywhere, but especially in LoDo. I think it really can serve as a model for future development.”

Falcone said that was the goal from the beginning.

“It was really designed and built to have a landmark-quality presence,” he said. “I think the building will be an important and admired building in LoDo for years to come.”