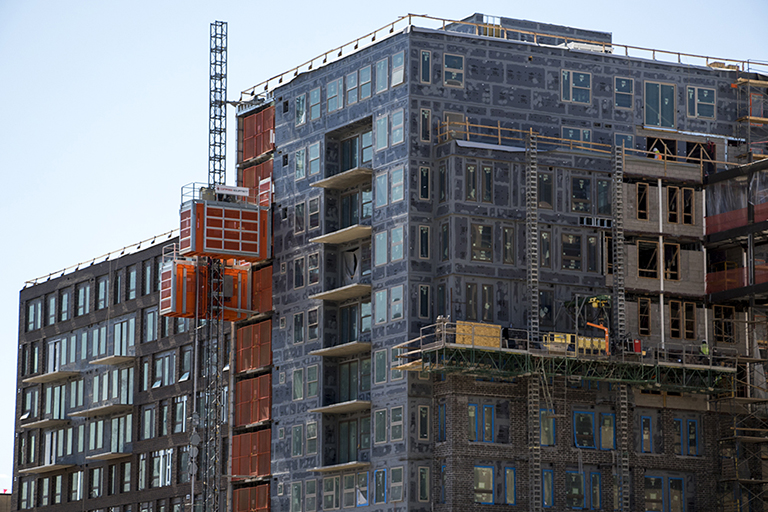 If you’ve noticed the construction at 9th and Colorado taking shape lately, it’s not just your imagination. The first phase of the development, the Block 7S apartments will be opening in April 2018, according to developer Continuum Partners.

That building will have 275 units, mostly one-bedroom apartments, according to the developer. It’s only one part of the bigger 26-acre site that will eventually have somewhere between 900 and 1,100 residential units, along with parks, retail and office space.

If you would like to rent one of these apartments, better have a flexible budget. Via email, Continuum Partners Development Director Frank Cannon said that rents have not been determined yet for the building.

And if you’re earning less than area median income, these apartments may be out of reach. None of the Block 7s units are planned as affordable housing, though Cannon notes that Continuum Partners worked with developers on the nearby affordable Ash Street Apartments as part of the 9th and Colorado redevelopment.

Parking costs are also still being evaluated for the residents, Cannon said. But rest assured, parking will be available. An existing parking lot from the old University of Colorado hospital will reused, which can hold nearly 1,100 cars, according to Cannon. That garage won’t just be for the Block 7 apartments, eventually other residents of the development will use it too.

As far as amenities, the second floor has an outdoor deck with a spa, pool and landscape gardens, according to Continuum Partners. Inside the second floor, there’s also plans for a community kitchen, club room and a large gym with windows on three sides. Plus, the 9th floor will have a conference room.