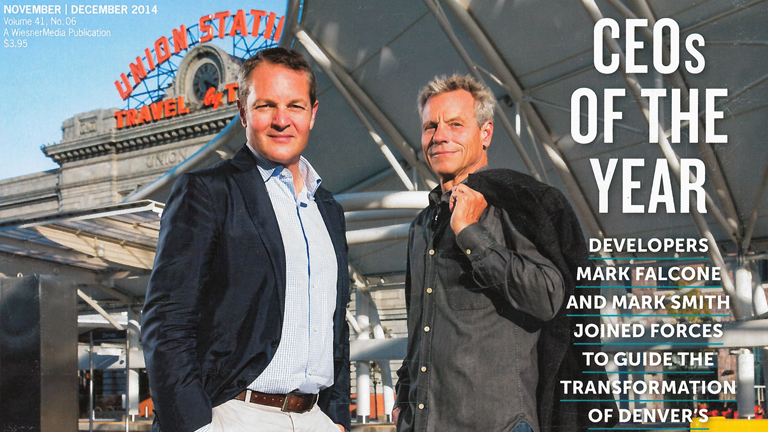 Nine years ago, a group of about 75 architects, engineers, contractors and developers gathered in LoDo to answer a call for potential developers capable of spearheading an urban project of nearly unprecedented scope, complexity and stakeholder interest: redeveloping – reinventing, really – the historic Union Station area in downtown Denver.

Mark Falcone was there when his friend Mark Smith walked in, scanned the crowded room and sat down next to him. At one point Smith turned and asked Falcone if he was going to take a run at the huge project.

“I think so,” Smith replied.

The downtown developers looked at each other. “Why don’t we just do it together?” Smith recalls suggesting. “We said ‘Okay,’ and that was it.”

Smith and Falcone are co-winners of this year’s ColoradoBiz CEO of the Year award, a nod to their teamwork and leadership on the landmark transportation, commercial and residential project. Naming dual winners of the award is nearly unprecedented – Trinidad’s husband-wife team of Mark and Annie Danielson were co-winners in 2009 – but the shared honor seems fitting in a year marked by Union Station’s grand reopening, given the collaboration and teamwork that characterized the undertaking from the outset.

The two Marks, as they are often called, had worked together on a downtown project at 15th and Delgany streets years earlier and became friends – both single, living downtown and exploring the emerging Denver nightlife scene.

“By the time we showed up in that room together, we had a lot of trust in each other,” Falcone says. “We just realized that we could operate off of a handshake. It was that simple. Mark and I recognized so many common interests in the way we approach things.”

Chris Frampton, managing partner at East West who has known both Marks for years, points to the joint venture agreement for the massive project between the Marks’ companies that sounds tantamount to a handshake. “It was four pages long with signatures, which is pretty crazy,” Frampton says. “We’ve got joint venture agreements that are hundreds of pages long. But the agreement between East West Partners and Continuum for the development of the station, for our master developer role, was four pages. And that’s because there’s an incredible amount of trust between those two guys.”

That agreement between two driven, admittedly impatient entrepreneurs grew into a successful partnership for eight years – and counting – on the complex, 19.5-acre, multi-billion dollar project. Frampton calls it the most significant development in the city in the last century.

“It’s a close battle between that and DIA,” Frampton says. “And I would actually suggest this one (Union Station) is more important. This was a one-time opportunity. One piece of land; it was next to downtown – and today it is downtown – and if it was done wrong, that would have been that. There was no recovering. The airport could have been five or six places; it wasn’t as location-important. The airport’s a big deal, but in terms of downtown, (Union Station) is clearly the most important project in 100 years.”

The redevelopment project included a more than $500 million multi-modal transportation hub with FasTracks trains and underground bus connections in collaboration with four public partners – RTD, city and county of Denver, Colorado Department of Transportation, and Denver Regional Council of Governments.

The master developer is more than a supervising contractor; Falcone and Smith put it in filmaking terms, likening the role to that of producer, director and scriptwriter.

In the case of the Union Station project, Frampton says, “Mark and Mark’s primary role was to lead the design, work with the public agencies to create the financing, identify how to construct the projects, and to put together the team to execute on all of that. And then finally, another obligation was to buy land and develop private real estate adjacent to the station.”

“You have to have a vision and be able to execute on that,” Smith says. “You need an inspired vision or you don’t come up with a good end-result.”

Another attribute the Marks brought to the table: “Both of them are very good at raising money,” Frampton says, “which is crucially important because we did have an obligation as master developer to raise $27 million. We were probably selected because both (companies) had been quite successful – us (East West) at Riverfront Park, and Continuum with Belmar. And in both circumstances the companies demonstrated a great ability to work inside of a public-private partnership, which is truly a skill.”

Diane Barrett, chief projects officer for the city and county of Denver, said because of a complicated funding plan involving public entities, the neighborhood company worked for the first two years without financial return.

“The four public agencies were not able to enter into a contract with them for more than two years after they were selected as the master developer,” Barrett explained. “They continued to do all this work and spend tons of money, with no recompense or contract. I don’t know very many companies that would do that. They were totally committed to the project from day one. I thought what they did was extraordinary.”

Smith and Falcone’s ability to get things done pushed team members and the project forward, even during challenging financial times. Falcone said the recession actually was a great time for a big public project (think Work Projects Administration in the 1930s, he said) in terms of availability of workers and pricing; but it also led to a lot of sleepless nights for the Marks in 2008 and 2009.

“Their impatience, drive and commitment move projects,” said Maria Garcia Berry, CEO of the communications firm CLR Associates and a Union Station master plan team member since 2002. “When you are working on a project with them, you better be all in.”

Berry said when people leave a meeting with Falcone and Smith, the action plan is not, “Let’s talk next week,” but rather, “What are you doing tomorrow?”

Falcone, 51, earned a degree in urban history at Colgate University and spent most of his twenties and early thirties with his family’s real estate development group, The Pioneer Cos., overseeing 5 million square feet of development across five states. He founded Continuum Partners in 1997. Today he lives two blocks from Union Station. Falcone is the more intense of the two Marks, friends say.

Smith, 62, a third-generation Coloradan, grew up riding trains out of Union Station. He earned a degree in real estate from Florida International University and a master’s in management from Nova University. In 1986, he joined with Harry Frampton to form East West Partners, which became the driving force in the development of Vail’s Beaver Creek Resort. Today he divides his time between downtown Denver and the Vail Valley.

What motivates the two developers is their love for Denver and Colorado and for creating high-quality projects that will benefit the community for generations.

“They both have a very great sense of building community and building place,” Berry says. “Sometimes they see things that nobody can see. They can envision things 15 to 20 years out. Sometimes a lot of us have to catch up to their vision.”

Part of that visionary knack includes assembling great teams and surrounding themselves with high-caliber people. The Marks note the talents of in-house employees such as Frank Cannon, Tom Gougeon and Mike Reinenger, and companies on the redevelopment project that included Kiewit Western Co.; Skidmore, Owings & Merrill; AECOM; Kaplan Kirsch & Rockwell; and Hargreaves Associates.

The developers have four or five years of work remaining on the project, but what’s been accomplished to date clearly has brought fulfillment.

“We both took real comfort in being able to work on this together,” Falcone says. “We really knew it was going to be a big and challenging task. We realized that together we’d be able to create a better outcome.”

“It’s a great privilege,” Smith says. “We basically got to build a city inside a city. How many opportunities do you get to do that in your lifetime?”