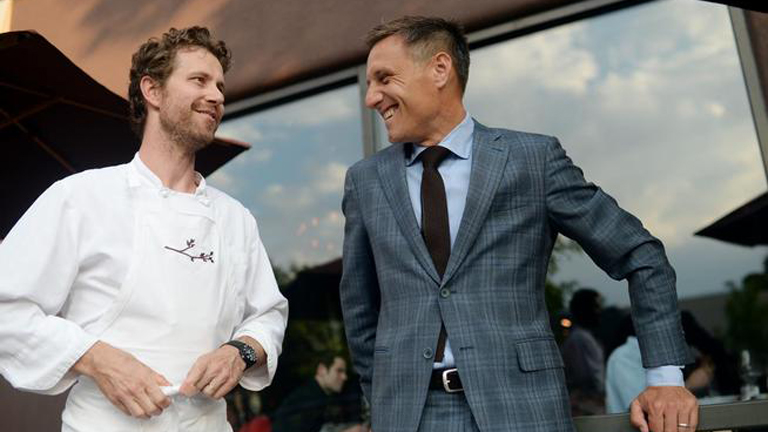 Deal puts eatery in a new 12-story hotel building, but it won’t be part of the inn By: By Colleen O’Connor

Bobby Stuckey and Lachlan Mackinnon-Patterson plan to open a new restaurant in the thriving Denver Union Station neighborhood that draws concepts from their award-winning Frasca Food and Wine and the original Pizzeria Locale in Boulder.

The restaurant will be owned jointly by Continuum Partners, which owns the adjacent hotel that will be managed by the Kimpton Group.

It’s all part of the A Block @ Union Station mixed-use development locaat 1881 16th St., a $120 million project that includes office, restaurant and retail space along with a public parking garage.

The still-unnamed restaurant is scheduled to open in December 2016, when the entire A Block project is expected to be complete.

Stuckey and Mackinnon-Patterson said the new restaurant will extend their concept of Italian cuisine.

“It will be a hybrid between the sit-down Pizzeria Locale in Boulder and Frasca,” Stuckey said. “It’s more casual than Frasca, but you’ll see some of the different pieces we have at the original Pizzeria Locale.”

The restaurateurs said they have long wanted to work with Continuum Partners founder and CEO Mark Falcone.

“Finally, the right opportunity presented itself,” said Falcone, who said he’s been a fan of Frasca since it opened in summer 2004.

“The emergence of a real great fine-dining scene in Denver coincided with when Bobby and Lachlan opened Frasca in Boulder,” he said. “Whether they were the catalyst for it or symbolic of the moment in time when Denver was ready for it, they’re at the center of what’s grown into a sophisticated fine-dining experience in the Front Range.”

Stuckey, a master sommelier, will also bring his expertise on wine to the new eatery. “We’ll have a really ambitious wine program, and we’re excited about that.”

This year, Wine Enthusiast magazine tapped Stuckey as the best sommelier in the country, and in 2013, Frasca Food and Wine won the James Beard Award for outstanding wine service.

The 125-seat restaurant will be on the 16th Street Mall, with its ground-level entrance near the Wynkoop Street Plaza and new train platform.

It will have a full bar, open kitchen and seasonal outdoor patio.

Semple Brown Design will design the restaurant and the 12-story hotel, which will have a modern alpine feel, and “really tries to reflect the regionalism of Colorado in its design but also has a contemporary feel,” Falcone said.

While the restaurant is part of the hotel project, it is a stand-alone place that won’t provide food and beverage service at the hotel — just lunch and dinner for its own clientele.