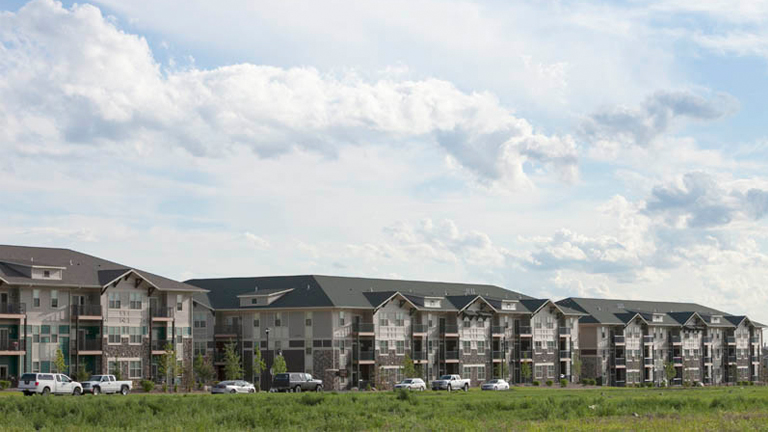 The Ridge at Harvest Hills to Cater to Families and Include Parks & Recreation, Ease of Access to Local Offices and Shopping

WILLISTON, N.D.–(BUSINESS WIRE)– Answering the call to build permanent housing in one of the fastest-growing cities in the United States, the City of Williston today announced that affiliates and clients of Kohlberg Kravis Roberts & Co (“KKR”) including KKR Financial Holdings LLC (“KFN”), along with co-investors Pfeffer Capital and CP Realty, have acquired land to develop a high quality, permanent residential community in Williston, North Dakota. Financial terms of the transaction were not disclosed.

“Williston is one of the fastest growing cities in America and we are dedicated to building a long-term sustainable community. We are thrilled to work with new partners like KKR, Pfeffer Capital and CP Realty to provide the quality housing alternatives we need to support the demand created by our thriving economy,” Ward Koeser, Mayor of Williston, said.

The project, The Ridge at Harvest Hills, includes 164 acres of land overlooking the city of Williston. Construction of infrastructure for the current phase is under way and will support development of up to 330 apartments which are scheduled to commence in Spring 2013 plus completion of lots intended for sale to homebuilders for construction of 500 single family, townhome, and duplex homes.

The Ridge at Harvest Hills will represent an evolution in housing stock and community planning for the city as developers and public officials worked together to include parks, recreation, and open space. Furthermore, the community was planned to slow or divert commercial traffic to further enhance the suburban feel of safety and security for its inhabitants. Importantly, and unlike much of the surrounding land, The Ridge at Harvest Hills is fully entitled and has immediate access to utilities so the new community can help solve the city’s near-term housing shortage as well as long-term community demands.

The Ridge at Harvest Hills is ideally located in close proximity to the new Sand Creek Town Center retail development, the new office complexes of major oil services firms, the municipal golf course, Wal-Mart and an elementary school. Creating a new, quality neighborhood to attract families is a key step in the sustainable development of Williston where an estimated 15,000 oil and gas professionals are living in various forms of temporary housing including “man-camps,” RVs and hotels.

“The Ridge at Harvest Hills represents a major investment that will help the city of Williston meet its current and long-term housing needs,” Governor Jack Dalrymple said. “The state is doing its part by facilitating greater development of affordable housing in our oil-producing region and in fast-growing communities throughout North Dakota.”

Western North Dakota is home to the Bakken formation, which occupies about 200,000 square miles of the subsurface of the Williston Basin, underlying parts of Montana, North Dakota, and Saskatchewan. The Bakken is well-known to be a prolific source rock for oil and now natural gas. A 2011 State of North Dakota study revised the original estimate by the U.S. Geological Survey on the amount of oil that could be recovered — from 3.0 to 4.3 billion barrels to over 10 billion barrels. The positive outlook led to a surge in drilling and production in the Bakken. There are currently approximately 180 drilling rigs operating in the state and the City of Williston estimates that the next 10 years could see as many as 20,000 wells drilled, resulting in an additional 10,000 — 20,000 new jobs in Williston alone.

Earlier this year North Dakota surpassed Alaska and became the country’s second-largest oil producer behind Texas. In 2011, the average wage in the oil & gas extraction industry in North Dakota was $89,020, far exceeding the statewide average of $49,914, according to the North Dakota Petroleum Council. As a result of the surge in demand and the well-paying jobs, the state’s unemployment has plummeted to 3%, according to the Bureau of Labor Statistics release from July 2012.

Ralph Rosenberg, Global Head of KKR’s Real Estate Team, stated: “This is a long-term investment to support the structural needs of a growing community. Because of the energy boom, North Dakota has had an influx of new residents and our experience in the unconventional oil and gas business gives us confidence that this is not merely a temporary development. While Williston does have a supply of short-term housing, the city suffers from a shortage of sustainable communities that encourage employees to move their families or start them and reside permanently in Williston. The Ridge at Harvest Hills will be a true neighborhood, unlike any in the area, that solves a dire housing shortage and supports Williston’s thriving economy.”

John Pfeffer stated: “Our interest in investing in the technology-driven revolution in tight oil and gas production led us to Williston and the vision to create a substantial, attractive and permanent new neighborhood for families in this exciting and friendly town. Teaming up with world-class partners KKR and CP Realty makes achieving this vision possible. We are also tremendously grateful to the City of Williston for the incredibly welcoming framework they provide for entrepreneurs to succeed in.”

Mark Falcone, Co-CEO of CP Realty stated: “We are thrilled to be offering this fast growing community a neighborhood which will assist in the region’s efforts to recruit the talent and leadership necessary for this economy to continue its robust growth.”

For more information about purchasing a residence at the Ridge at Harvest Hills, please call (720) 946-4646 or visit theridgewilliston.com