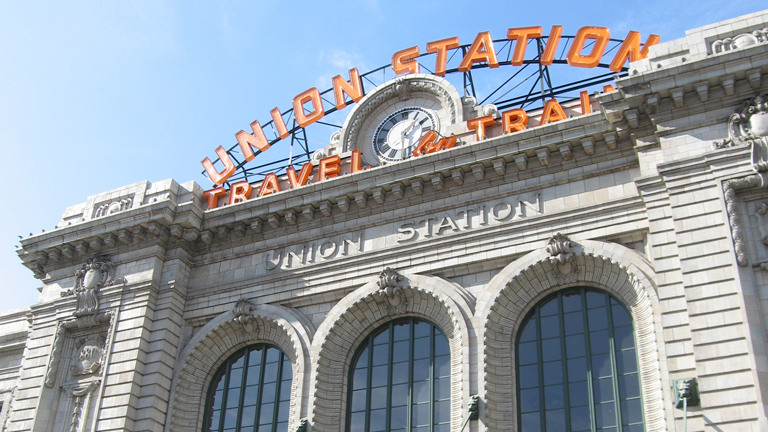 In 2002, Denver civic leaders began searching for ways to address the metro area’s problems with traffic, parking and pollution.

It was also clear that the transportation system serving Denver and the Front Range of Colorado needed substantial upgrades to accommodate the kind of multi-modal options that a growing, progressive-minded metro area requires. So in 2004, Denver voters approved FasTracks, with 122 miles of new commuter rail and light rail lines, and 18 miles of bus rapid transit, all radiating out from one central, downtown hub, Denver Union Station.

Symbolically, Union Station’s stately exterior, crowned by huge red letters that spell “Travel By Train,” not only serves as a friendly greeting from our city to its visitors, it’s the gateway to the American West, representing a key link between the city’s and the region’s past, present and future.

Continuum and East West each saw an opportunity to go beyond the construction of a new train station. They envisioned a broader gesture in which the station would serve as the focal point for an entirely new neighborhood surrounding a brand new regional multi-modal transportation hub. Both Continuum and East West had already been active in new developments in this end of the downtown so, being of like minds, they decided to pursue the project together and formed, the Union Station Neighborhood Company.

As part of their proposal to be considered as master developers, Union Station Neighborhood Company created an innovative design plan that would result in cost savings that were literally half the cost of the previously approved plan.

It improved programming and provided a significant architectural opportunity, the signature design element of the open air Train Hall. It had the vision to create a public and private partnership that would become a benchmark in the industry.

And it was the reason Union Station Neighborhood Company was ultimately chosen as the master developer in 2006.

Years of input-gathering and the constructive exchange of ideas resulted in features that make Denver Union Station a model for transportation agencies, urban planners, developers and communities the world over. These features include:

“From the very first day I heard the vision of what was going to happen at Union Station... I said it was going to be a home run”
Rob Cohen, IMA Financial Group