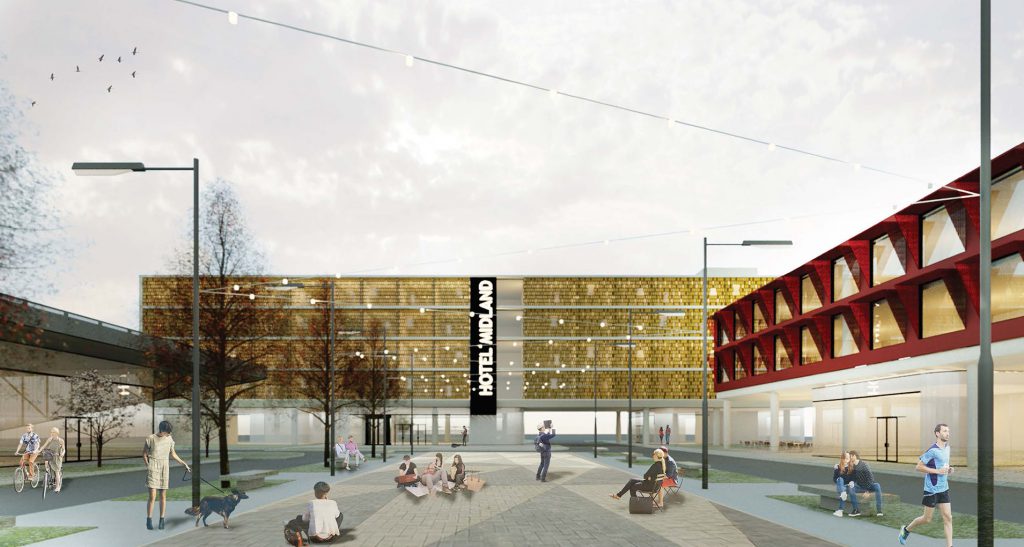 Westridge is a joint venture between Continuum and KKR to develop a mixed-use, walkable, master planned community on a 37.5 acre parcel in the heart of the Midland/Odessa metro area of West Texas. Westridge will be a new type of development and community for the area that is designed to both celebrate the spirit of West Texas and a denser, more walkable urban form.

Westridge will be anchored by the new, 300,000 square foot regional headquarters of Anadarko Petroleum, but will also incorporate over 100,000 square feet of retail and restaurant space, a daycare, a boutique hotel, and several hundred rental apartments, all easily walkable via a central, landscaped boulevard and connecting street grid planned for the site. Landscaped open spaces interspersed throughout the site will help define the place and make striking use of native plant species and natural growth patterns to both minimize the use of water for irrigation and soften the area, inviting the activity and interaction of the future residents, workers and visitors. A high-minded but humble design aesthetic will define Westridge’s architecture, tying together the prairie heritage and industrial history of West Texas with contemporary concepts and new technologies. Westridge will be a new anchor and site of community life for Midland and Odessa as the area embraces the developments of the 21st Century.

Midland and Odessa are key cities in the Permian Basin of West Texas, one of the largest and most easily exploitable oil reserves in North America. Originally settled and incorporated as the midway point on the rail line connecting Fort Worth and El Paso, Texas, the area’s history and fortunes have been largely tied to the petroleum economy since the discovery of oil in the Basin in the early 1920’s. As a result, development of the area since that time has largely followed a boom-and-bust pattern tied to the price of oil, and the urban form evolved to cheaply and rapidly sprawl to absorb new residents and investment in good times and to contract and consolidate in down times. Midland is now enjoying a rejuvenation thanks in large part to the recovery of the price of oil but also thanks to the discovery and implementation of new drilling techniques which promise to make the remaining reserves in the Basin more economical to tap and should therefore also help to stabilize the local oil economy as a result. Despite the current mini-boom ongoing, local officials from the public and private sectors have begun to invest in economic development projects that diversify the economy away from petroleum, with investments in renewable energy and the creation of the Midland Air and Space Port being prime examples. Such changes in strategy and thinking make the timing right for an innovative project like Westridge.