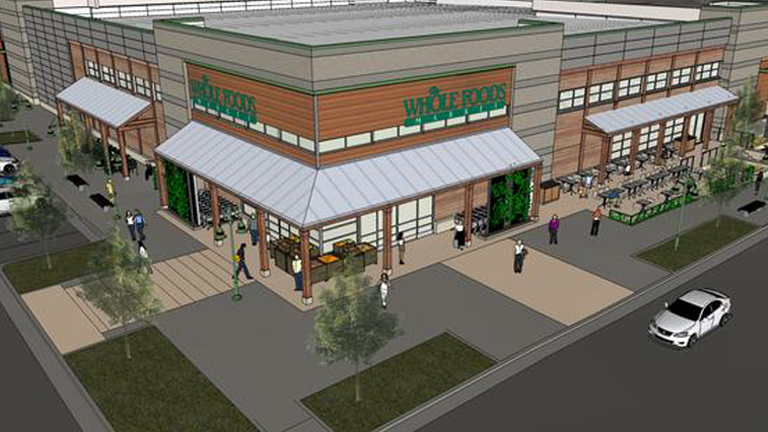 The compact Bradburn community in north Westminster will nearly be at its complete buildout after a Whole Foods Market opens on the southeast corner of Vrain Street and West 120th Avenue in December.

“We’re down to our last 8 acres,” said Roger Pecsok, development director of Continuum Partners. Continuum is the company responsible for construction of Bradburn, a 125-acre, mixed-use village on 120th Avenue, between Federal and Sheridan boulevards.

Pecsok said the new, 35,000-square-foot Whole Foods won’t take up all of the last eight acres, which are being reserved in part for townhomes, but it will bring Continuum that much closer to finishing mixed-use development that began in the area in 2000.

“We’ve been speaking with Whole Foods for many years about Bradburn, knowing that the store would fit the business model and be perfect for the neighborhood,” Pecsok said. “The timing has finally matched up, and a lot of people are excited for this.”

The new building is under construction. Whole Foods plans to close its store at 9229 Sheridan Blvd. and migrate everything to the new location,which is about 3 miles north of that store.

The Sheridan Boulevard location is smaller than the new store will be, offering a smaller selection of marketplace amenities than most Whole Foods superstores in the metro area. The space was used as a Wild Oats Market prior to Whole Foods’ acquisition of Wild Oats Markets Inc. in 2007.

“They had to work with the space they were given,” Pecsok said. “This new building gives them an opportunity to expand their presence and tailor it for the Bradburn community.”

The city of Westminster helped the relocation with an $800,000 infrastructure stipend. Officials in the city’s planning department say they are glad that Whole Foods is not leaving the city.

The construction project surrounding the store will also include the continuation of Main Street between Tennyson and Vrain Street, according to city planners.

Once complete, the neighborhoods at Bradburn will include more than 700 custom homes, single-family homes, town homes and apartments. There will be more than 300,000 square feet of restaurants, shops and offices at full buildout, according to Continuum.