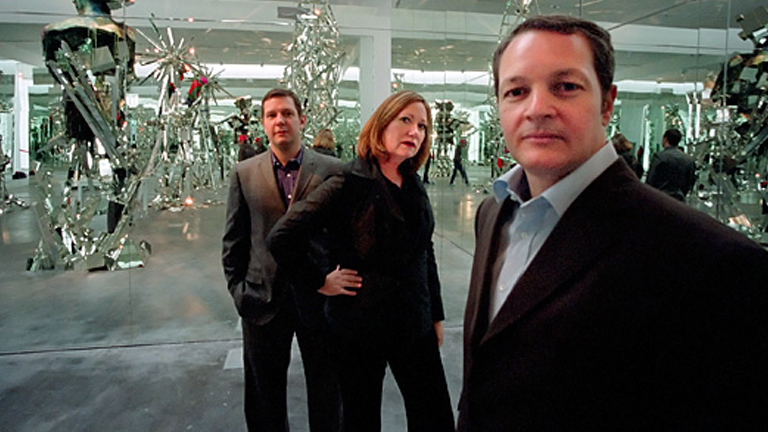 A Museum Rises, but Not the Usual Way

Published: November 12, 2007
PEOPLE in Denver like to say that while New York may be an experiment that is over, their town is one in the making. That’s the sort of spirit that moved Karl Kister, a philanthropist and entrepreneur, to become involved with the Museum of Contemporary Art/Denver.
Kevin Moloney for The New York Times

The Museum of Contemporary Art/Denver.

It was spring 2001, and he had just moved from New York, after resigning as chief operating officer of an Internet start-up. He and his wife, Mary Caulkins, were itching to become part of Denver’s cultural scene, when he happened across a show being installed at the institution, which had been mounting exhibitions for only about two years and was temporarily housed in a converted fish market.“I literally knocked on the window and asked if they needed help,” he recounted. “They said, ‘Sure, you want a paintbrush?’” Mr. Kister, amused, agreed. While working, he asked so many questions about the museum’s development plans that the newly hired director, Cydney Payton, was called downstairs to meet him.

A few months later, he joined her board; by 2003, he became its president, and the board decided to take its modest institution global. That involved creating a $3 million endowment, putting up a new building and nabbing a star architect — quite a stretch for a museum that at the time had only six employees.

On Oct. 28, that dream was realized when the new museum opened to the public in a vibrant loft neighborhood. A smoky glass prism with translucent interior walls, it has attracted international attention because it is the first American project for David Adjaye, a British architect born in Tanzania who is known for his minimalist style and international roster of artist clients.

The museum is also on track to be the first museum to win a gold LEED (Leadership in Energy and Environmental Design) rating from the United States Green Building Council.

But perhaps more important is the fact that the project was underwritten entirely by private financing, making it something of a rarity among public museums, Ms. Payton, the director, said. Though at first she went after public money, “the momentum for us was from the private sector, and that became the path we went down.” That path has not necessarily been bad, Mr. Kister said, because “we can be a lot riskier in what we show.”

So how did this tiny institution pull off such an ambitious project? “The time had come for a city like Denver to have a contemporary art museum,” Mr. Kister said. Ms. Payton concurred. Like many other cities in the West, she noted, Denver has an abundance of wealth, a lively contemporary art scene whose legacy has been largely overlooked by art history and a population whose civic pride is strong enough to want to put that right.

“It’s a very typical regional attitude at the moment,” she said. (Indeed, the city has been teeming with museum building projects: the opening of Daniel Libeskind’s new wing for the Denver Art Museum in October 2006; and plans for the Clyfford Still Museum, to open in 2010, under way.)

It also helps that half the board members are Denver natives, while the rest are transplants who are eager to make their mark. Denver, Ms. Payton added, “is a place where you can bring your ideas to the table and they get heard.”

Mr. Kister is one such transplant. So is his friend from prep-school days, a developer, Mark Falcone, who has also joined the board.

“Denver is one of the newest major settlements in the United States, and it’s still being formed,” Mr. Falcone said. “People see opportunities to participate in shaping it.” (He should know: his star project is the redevelopment of Union Station in Denver. ) In 2003, he and his wife, Ellen Bruss, decided to participate by donating a plot of land, later appraised at $1.5 million, for the Museum of Contemporary Art’s new home.

The gift got plans for the building started. Within a few months, Mr. Kister assembled a committee that gathered interest from 47 architects, selecting 6 finalists. But rather than cleaving to the usual protocol — asking architects to make their presentations behind closed doors — Ms. Payton took the process public, requiring each architect to give a lecture to the community. Although Mr. Falcone was doubtful, “it proved to be a brilliant process,” he said, adding, “Cydney was exactly right.”

The lectures were held on six Mondays in February and March 2004. “I thought I’d be happy if 150 people turned up,” Ms. Payton said. But to everyone’s surprise, the first lecture drew more than 500 people, almost double the hall’s capacity. Later talks, held in a converted synagogue, pulled crowds up to 900. The plans were also posted on a Web site, which drew comments from nearly 5,000 people.

As Ms. Payton put it, “It just became the thing to do.” (The lecture series also became a singles scene: one couple who courted there are about to become major donors.) The architects were grilled by two more selection committees — one comprising architecture students from the University of Colorado at Denver, and the other of high school students from P. S. 1, an alternative public school.

One P. S. 1 student, Ian Ruskey, was chosen to introduce Mr. Adjaye, the museum’s architect, at the groundbreaking in May 2006. Now a college freshman, he remembers the experience fondly.

“It was just kind of a cool thing to do,” he said. “You got to go to the museum each week to interview these guys, and it was always fun.”

His focus group asked each architect to answer the same questions, including “Tell us what you know about Denver” and “Is the budget realistic?” But “the one that always got them was, ‘What is your greatest success and what is your greatest failure?’” Mr. Ruskey said, laughing. “You could always see them get real tense.”

For Mr. Adjaye, the winner, the process proved revelatory. “I had very clichéd views of Denver,” he said, “and they quickly changed.” It was also reassuring: “There was something very interesting about having an audience give you feedback about the project, because it gives you a certain sort of confidence.”

He was also struck by what the lectures did for the museum. “By turning it into a public discourse, you build a community around a project,” he said. “It built up their constituency in a way they hadn’t expected.”

As Ms. Payton pointed out, the process also gave them “a bit of market research.” Once Mr. Adjaye won the commission, the board decided to start raising money without the usual feasibility study.

“We felt like this process had already told us that there was a need, there was an audience and there was support to be found in very large numbers,” she said. “We decided to do everything counter to the typical strategy.”

Using this groundwork, Mr. Kister started an $18.6 million capital campaign in June 2005, aiming it at board members, “people within the community who had an affinity for what we were doing,” and others who had been impressed by the selection process.

As of early this month, the museum had raised about 83 percent of the building’s $15.9 million construction budget, and 33 percent of the $3 million goal for the endowment. It also won the Colorado museum brass ring, a gift of more than $1 million from the Vail collectors Kent and Vicki Logan.

But perhaps the most positive outcome for the museum is that it has generated strong support. Since the lectures, the volunteer pool has quintupled to 150, and memberships have almost quadrupled, to more than 2,700.

“It seems like their whole process and outlook is a lot more authentic, and that’s very attractive,” said Mr. Ruskey, the college freshman. “It’s been really exciting to see this blossom. It makes you wonder what else in life might be this way.”